Henry, the cat, is a world-wise stray we adopted. His main job is helping out with the vole population. He does a pretty good job of catching them, but, unfortunately, his favorite thing to do with voles after killing them is to deposit them on the mat before the front door or patio door. It is not pleasant to step on a chewed-up vole. It is a pleasure, however, to see that the population of voles has decreased by one.

Riley, the dog, is an Old Time Scotch Collie. He generally protects the property and runs off the varmints--raccoons, oppossums, squirrels, and the occasional skunk--that wander onto the premises. We also hope he is a deterrent to deer. We know they are in the area and they have nibbled on our fruit trees, but so far they have not bothered the daylilies much. He provides good companionship in the garden unless it is too hot. Then he is lying in the shade somewhere or in the house asleep on an air vent.

Sparky is our newest helper. He was found wandering, starving. He rides around in the gator with us. 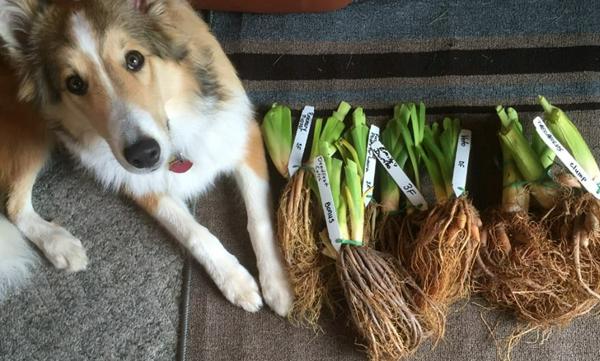 Henry and Riley surveying their domain

Sparky helping with the paperwork